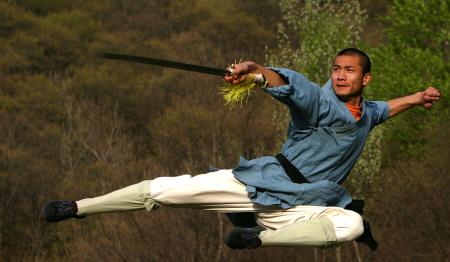 Wushu is the general term that is used for all Chinese martial arts. We know these martial arts as kungfu, but whatever the name, the martial art that evolved in China forms the basis of all Asian fighting arts. It took hundreds of years for all the current systems to evolve. Each wushu system or style has its own techniques, tactics, principles and training methods. Most of these systems are not only for bare-hand fighting but they include also the use of weapons. Each style has its own attitude regarding conflict and fights and there is a strong relationship with popular culture, philosophy as it developed over several millennia. Therefore wushu has become more than a mere system of defense and attack, wushu has evolved into a method to train body and mind so that the practitioner becomes a better and a more complete being.

The Chinese character 'wu' that makes up the first syllable of 'wushu' is in fact composed of two ideograms. The first is the character 'zhi' that means to stop and the second is 'ge' an ancient Chinese weapon, some sort of halberd. the character 'wu' refers to all things military, but the deeper significance is in fact 'to stop a weapon', so to stop a conflict so that there can be peace. To practice wushu not only strengthens the body but it also makes once spirit and will stronger. Ethics are also very important in wushu, just like we see in other Asian martial arts respect for the adversary is paramount.

In our times wushu has become a large body of different styles and practice methods, each of which has its own goal. Some styles focus on health and wellbeing. Others feel pride in tradition and origins. Since the second haf of last century wushu has also evolved into a competitive sport that is practiced worldwide. Millions of people in the world practice wushu and experience the unique character of this exciting sport.